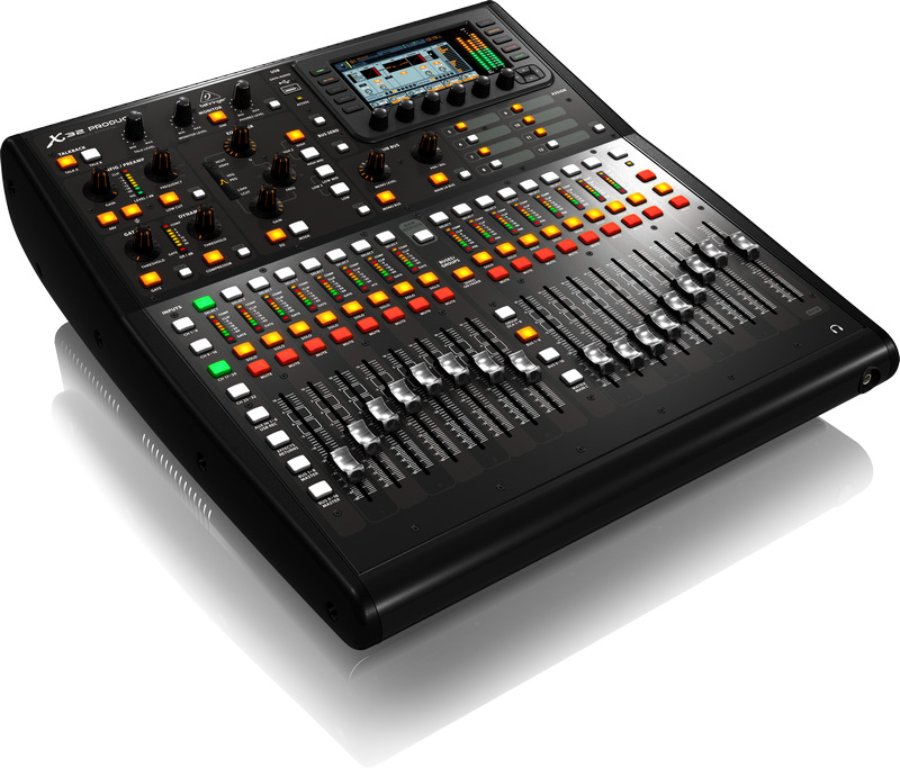 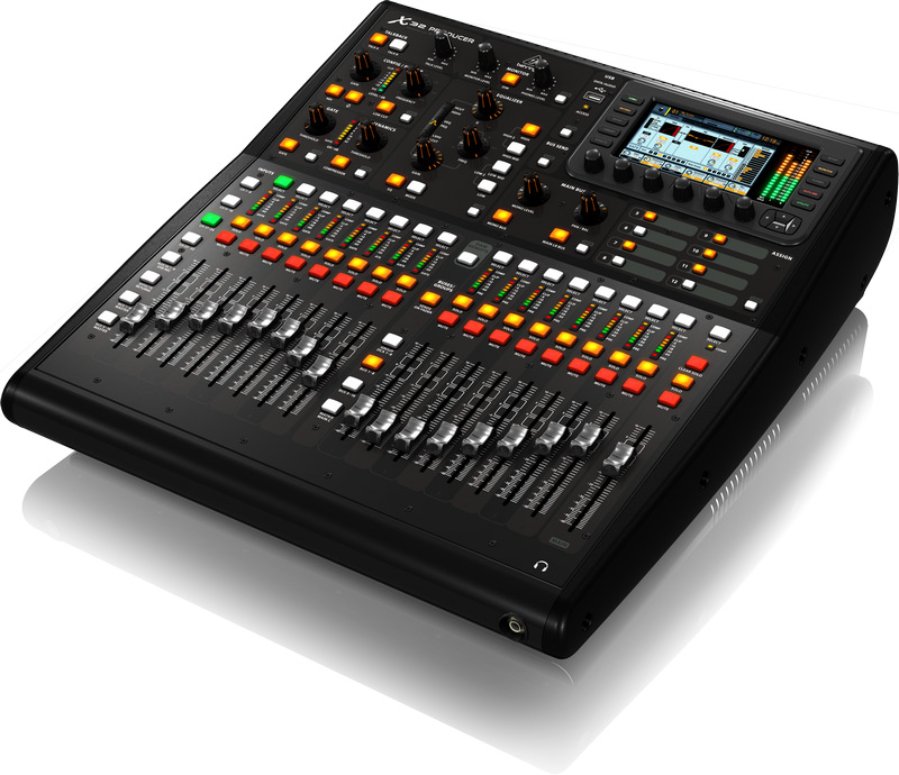 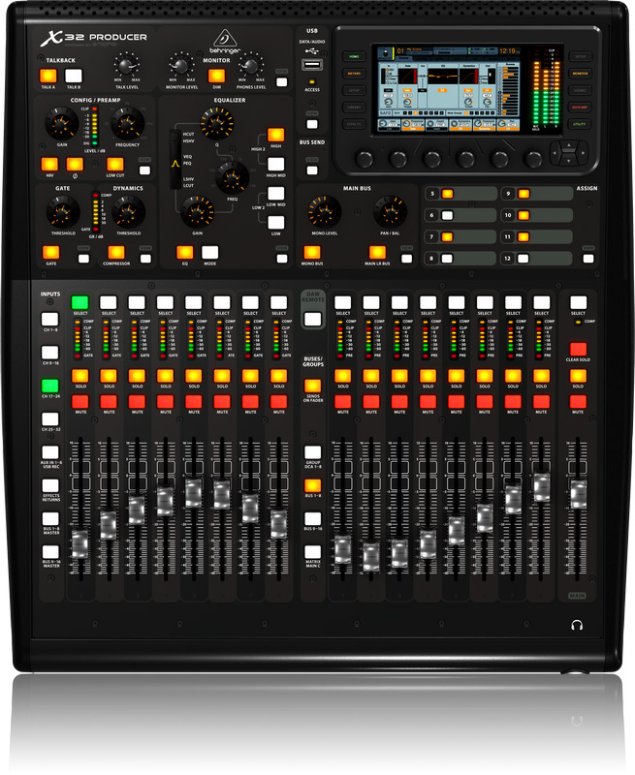 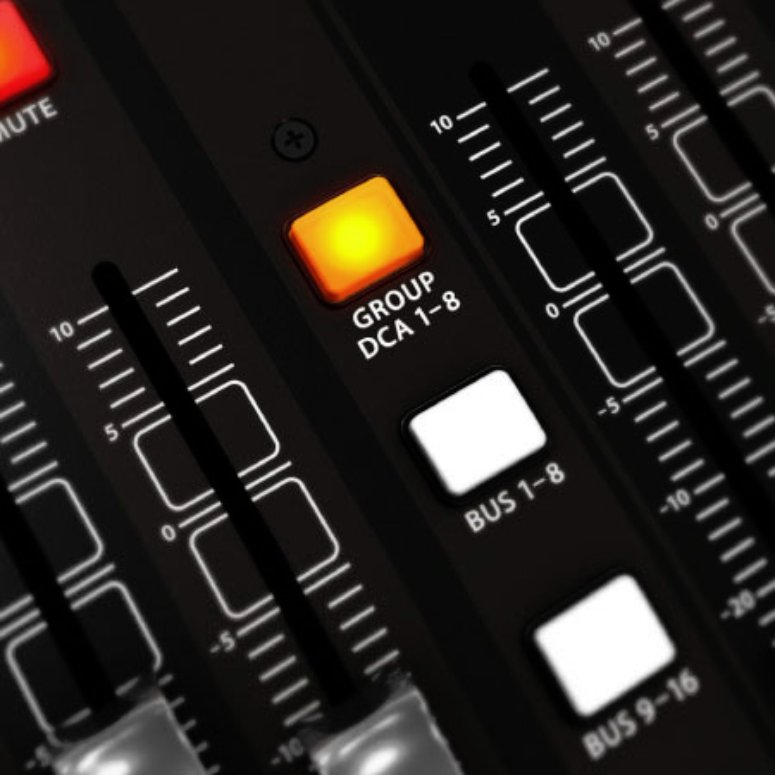 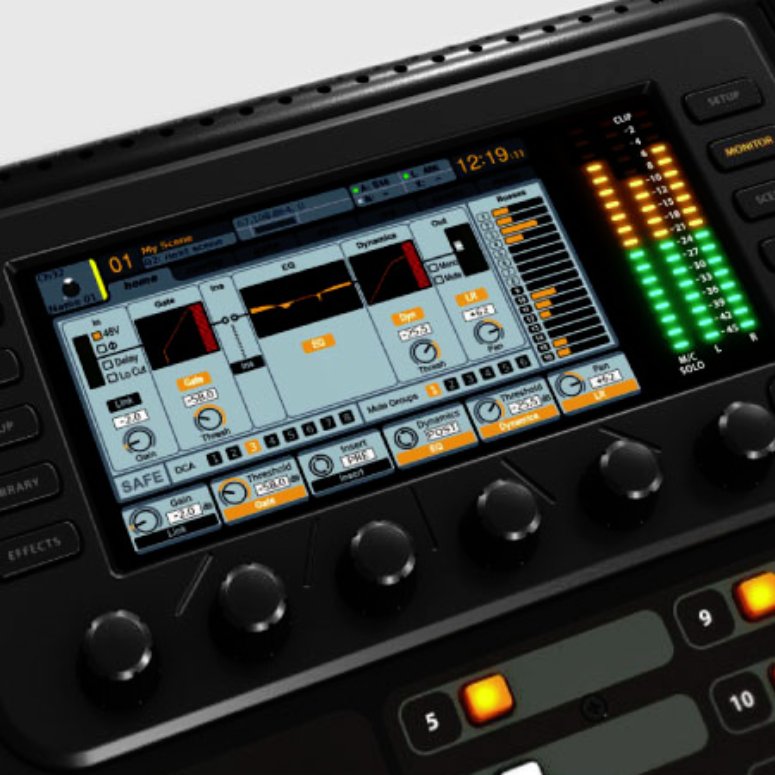 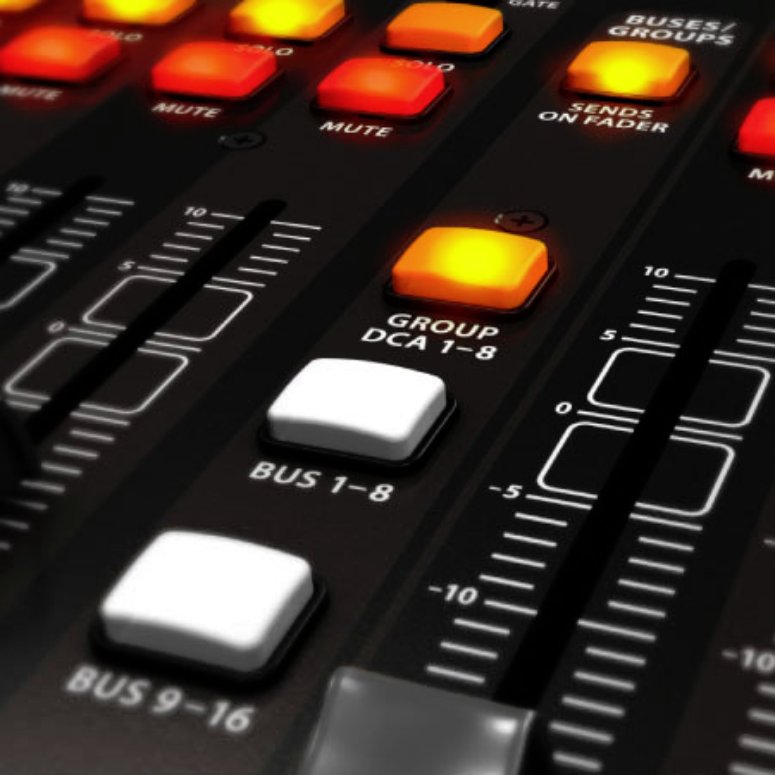 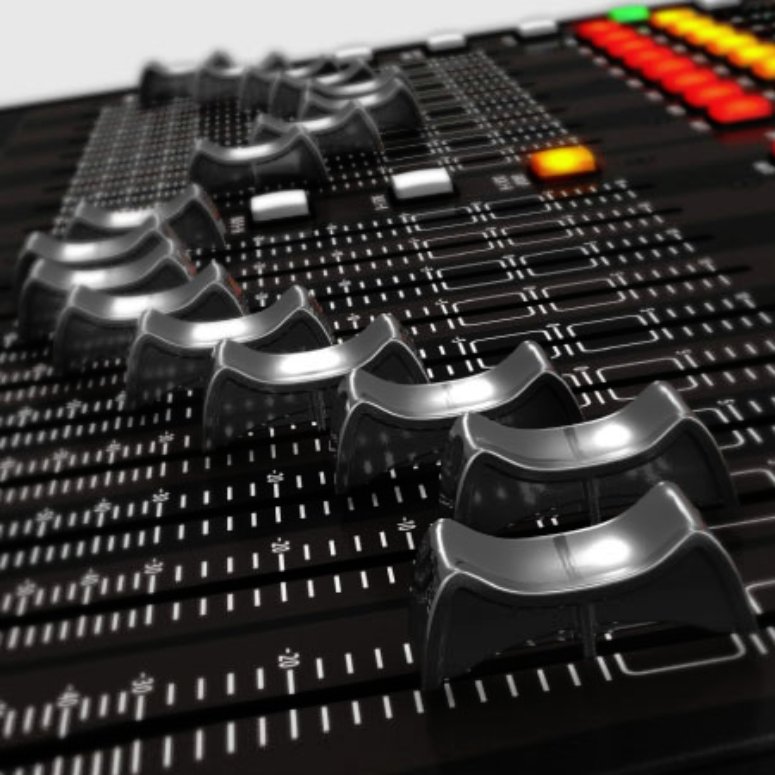 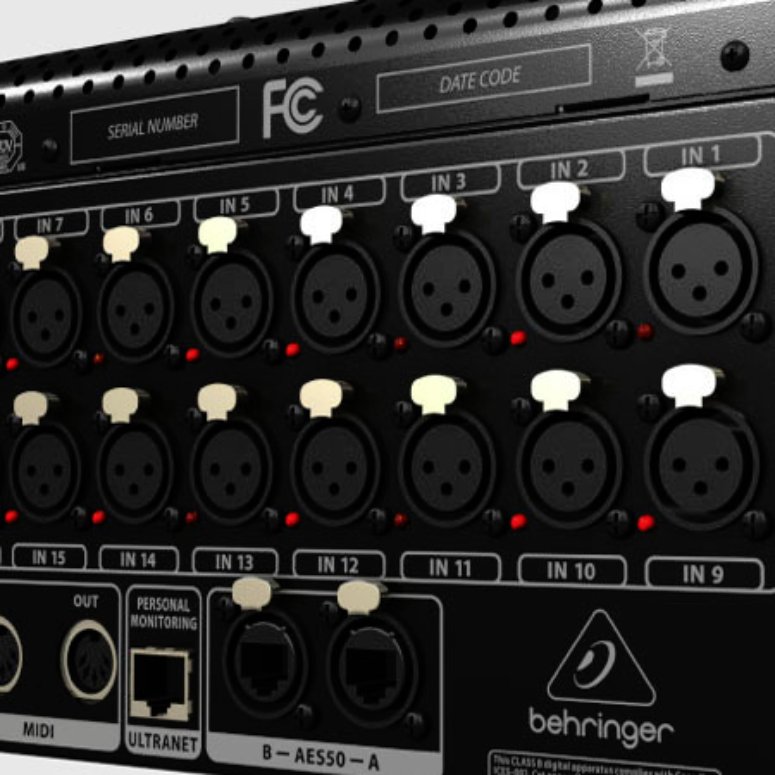 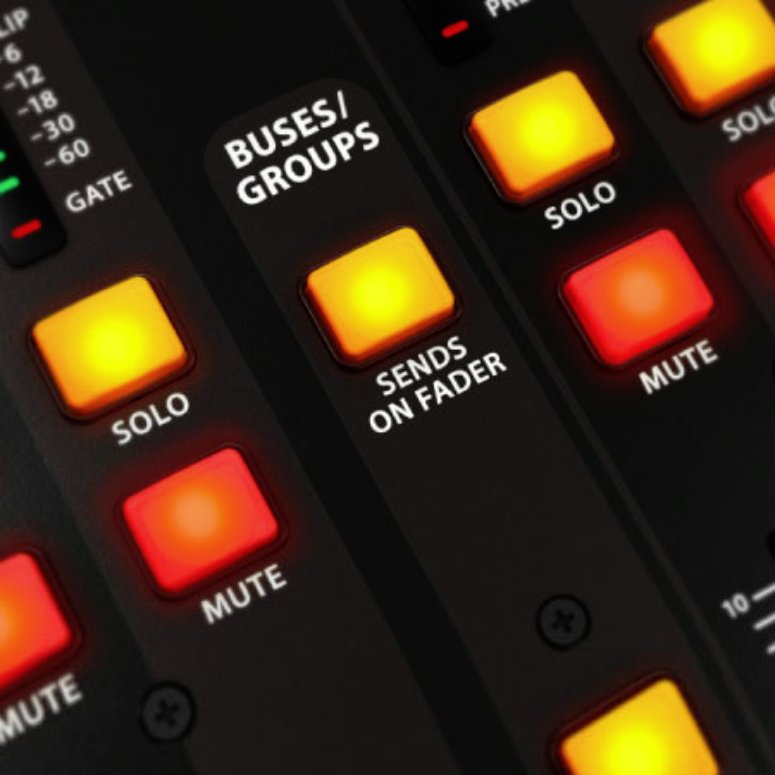 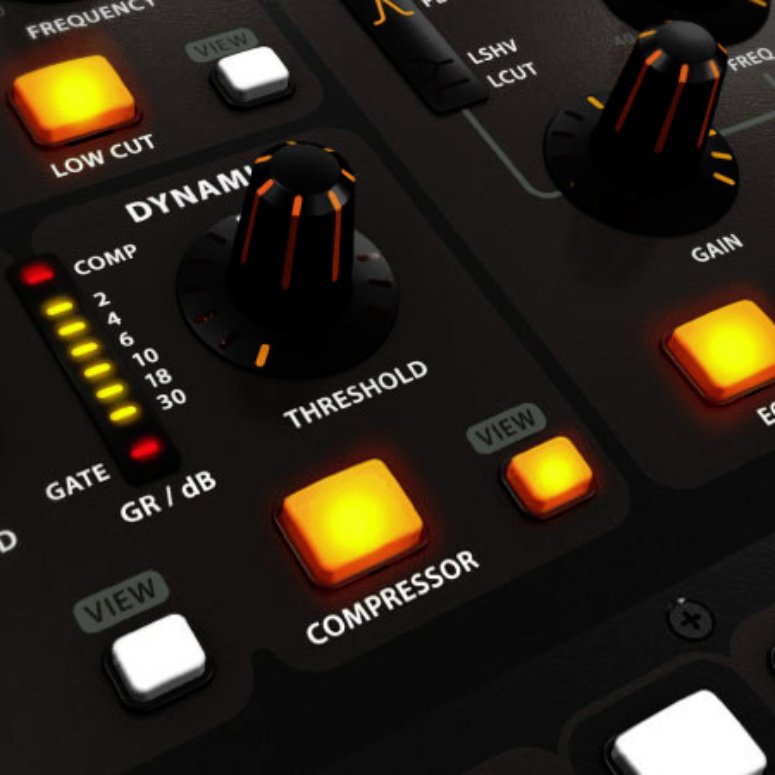 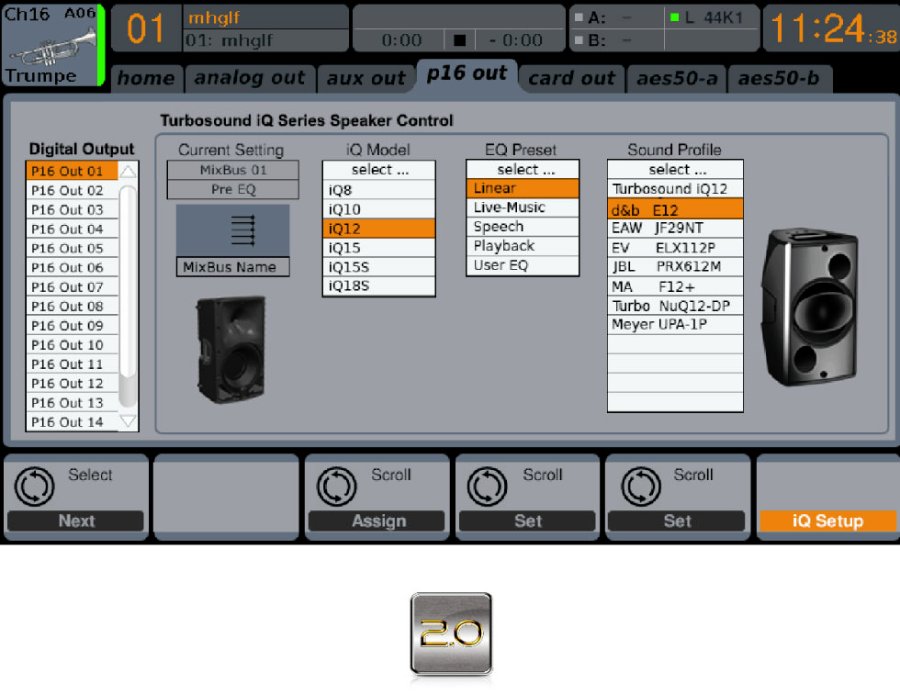 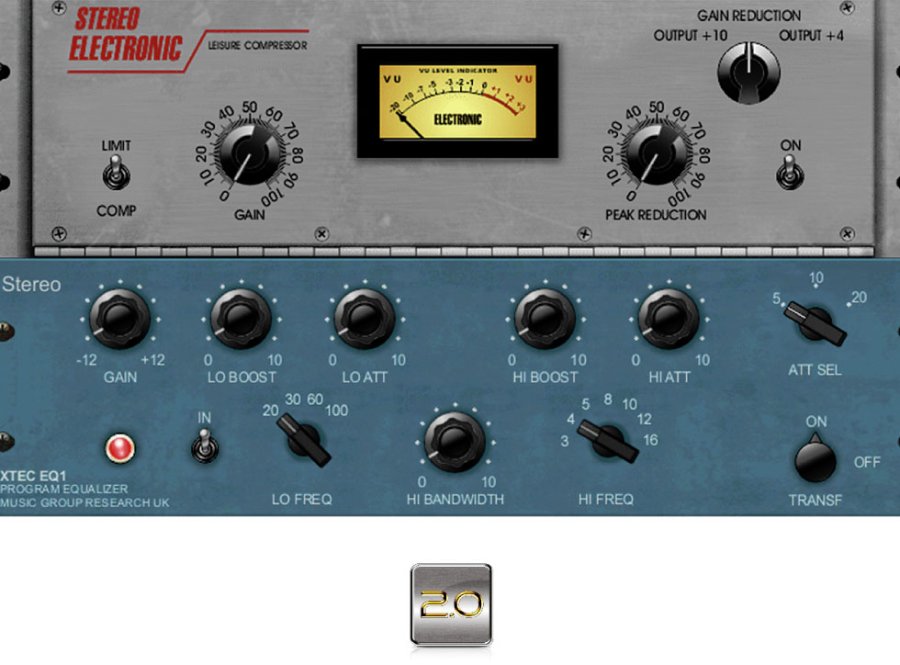 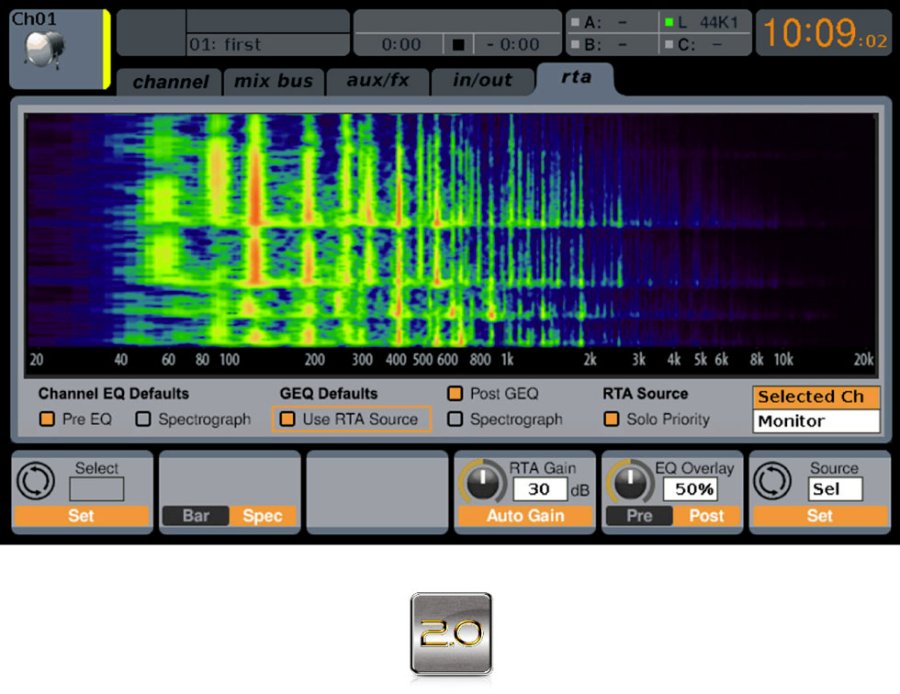 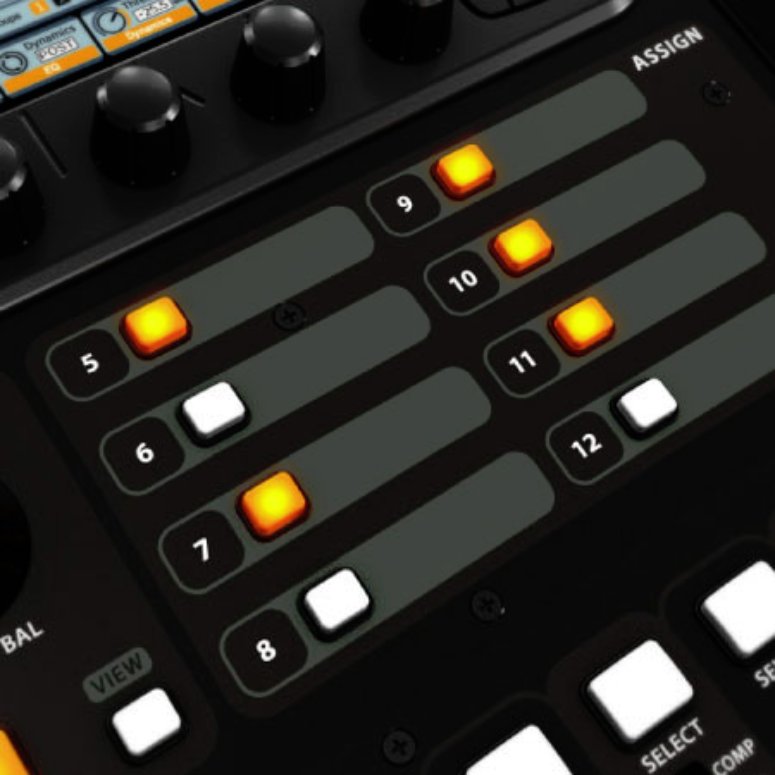 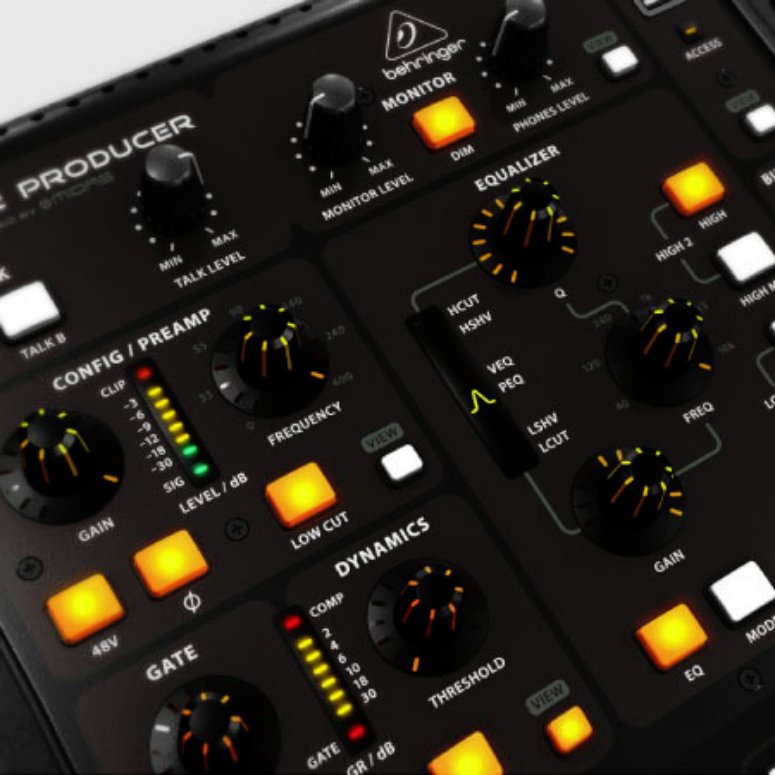 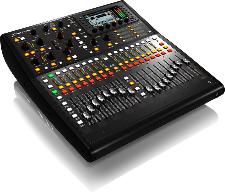 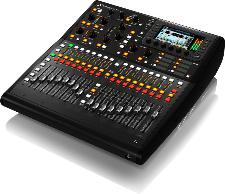 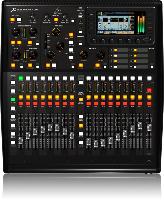 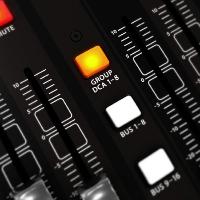 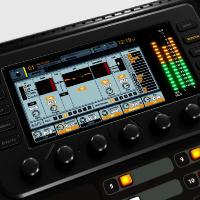 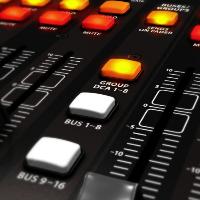 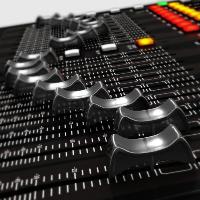 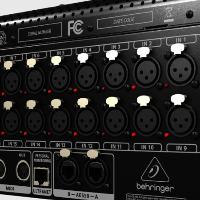 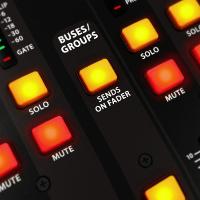 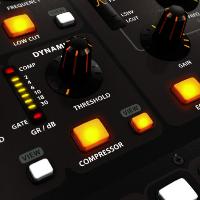 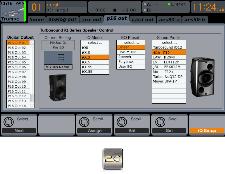 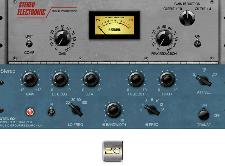 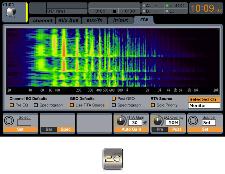 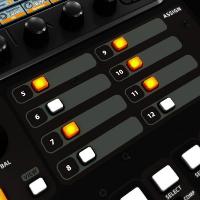 by Behringer
(0 Review/s) Write a Review

Thanks to its legendary onboard X32 mix engine, the X32 PRODUCER can be your top-notch studio recording interface today, control a complex theater production tomorrow, or sit securely in your side-rack while you mix your band’s club gig from your iPad. A revolution in its own right, the incredible X32 PRODUCER combines the finest analog I/O and powerful digital connectivity with ample processing for 40 channels, 25 buses and up to 152 signal sources. You can easily control every parameter of the mix directly on the X32 PRODUCER using the 800 x 480 graphic UI, but the awesome flexibility of networked remote control literally opens up an amazing world of possibilities. Use our X32-EDIT PC/Mac/Linux application, X32-MIX for iPad, X32-Q for iPhone/iPod touch and X32-Q for Android to control the mix from anywhere in the room. You can even run multiple instances of these powerful apps at the same time, giving your performers the ability to mix their own personal monitors on-the-fly! With its 16 MIDAS-design mic preamps and dual AES50 ports, the X32 PRODUCER can support up to six S16 digital stage boxes for massive I/O connectivity. Ultra-flexible routing options and 8 powerful stereo FX engines make the X32 PRODUCER the ideal choice for handling audio now – and as your needs grow.

Game 2.0 Reloaded
The BEHRINGER X32 has changed the game by completely rethinking what is possible from a digital mixer – and hundreds of thousands of users are enjoying the results. A fluid workflow coupled with a fully interactive user interface ensures immediate familiarity and instills confidence. Advanced engineering and meticulous design deliver stellar sonic performance at an extremely affordable price – changing the game entirely. Three companies shared a common vision – to engineer and build the very best-sounding, technically-advanced audio products for discerning professionals. The X32 Digital Mixer family is the result of the engineering, manufacturing and application expertise of legendary console manufacturer MIDAS, the iconic signal processing genius of KLARK TEKNIK and BEHRINGER’s unique ability to deliver a superior value proposition. The synergy between these three great companies runs deep in the X32. From the pristine, MIDAS-designed mic preamps to KLARK TEKNIK’s rock-solid, ultra-low latency SuperMAC networking technology and BEHRINGER’s completely re-engineered processing algorithms, X32 raises the bar on what a digital mixer can be. A singular passion for delivering advanced technology, unrivalled usability and true road-worthiness has enabled us to engineer a digital console that is the ideal vehicle for your creative expression. But we’re just getting started!

Enhanced Workflow & Multi-Channel Networking
With the introduction of our new X32 version 2.0 firmware, we have not only dramatically enhanced the workflow, but also added all-new capabilities including “Acoustic Integration” for total connectivity and control of your speaker and In-Ear Monitor (IEM) systems. Then we completely re-imagined the more than 50 onboard FX “Plug-Ins” and added classic processor examples based on“True Physical Modelling”. We’ve also made the X32 even more flexible, with swappable expansion cards for connecting to other multi-channel audio networking via USB, ADAT, MADI and Dante protocols, in addition to the onboard ULTRANET and AES50 connectivity. Above all, the X32 puts the power of digital in your hands – without compromise. You Win.

Intuitive. Immediate. Natural.
X32 PRODUCER is your mind-to-sound interface... the intersection of creativity and production. Whether you’re accustomed to digital mixers or not, the X32’s intuitive user interface offers a fluid mixing experience that instantly feels like home. And then there is the X32 PRODUCER’s latest version 2.0 firmware. We’ve added new scene management features and EQ functions, including a 100-band Real Time Analyzer, flexible library import/export capability and faster FX editing. We also included 16 new FX “Plug-Ins” which are based on True Physical Modeling of famous classic audio hardware. This process means that we essentially “rebuilt” classic analog gear in the digital domain. And then we added the most amazing digital networking that allows you to connect to the new TURBOSOUND iQ speakers via simple CAT5 connection. We call it “Acoustic Integration”. This high-performance iQ Series also includes authentic acoustic modeling of some of the world’s most famous speakers - all remote controllable from your X32 PRODUCER. This is the total solution you have been waiting for.

Motorized Faders
X32 PRODUCER serves the user a full complement of 17 long-throw, 100 mm motorized servo faders for primary mix control. Working in concert with the 5" TFT Display, the faders serve multiple functions while always keeping you informed. Separate fader sections for inputs and groups/buses allow for convenient assignments from inputs to groups/buses. With the ability to store up to 100 scenes, X32 PRODUCER’s motorized faders jump to life the moment a scene is recalled.

Channel Strip
The X32 PRODUCER Channel Strip puts the most important channel processing parameters into one section so that no matter which channel you are working on, the controls are always the same. This highly-efficient layout stems from BEHRINGER’s decades of console design and input from our users. Optimized control illumination ensures a clear indication of levels or status from any viewing angle. Illuminated rotary encoders and switches give you control of preamp settings, frequency shelving, dual dynamics sections, as well as multi-mode fully parametric EQ, bus sends, main, mono and stereo panning.

5" Main Display
X32 PRODUCER’s 5" day-viewable color TFT (Thin-Film Transistor) display shows the setting parameters you need when you need them. Selected for its high-contrast performance and outdoor visibility, TFT is ideal for concert and open air festival venues. Flanked by high-precision, context-sensitive tactile encoders, the screen comes to life and immediately reports in high definition all adjustments applied to a wide range of parameters. Intelligent design puts control of vital functions such as Effects, Metering, Routing and much more 1 or 2 button presses away.

Sends On Fader
X32 PRODUCER brings the convenience of digital mixing to your Aux and output bus mixes too, thanks to its integrated Sends on Fader feature. This incredible function allows you to build powerful, dedicated sub-mixes for monitor, secondary zone feeds, and much more—all without affecting the front of house mix or levels. The X32 PRODUCER allows you to send your choice of signals to any Aux or output bus and then dial in the perfect mix via the channel faders. The console remembers where you set the faders and instantly recalls them when you select a bus for quick adjustments.

DCA Groups
DCA (Digitally Controlled Amplifier) groups allow control over several signals at once without actually mixing them into a subgroup bus. X32 PRODUCER’s 8 DCA groups let you control multiple signals via a single fader, such as the entire drum mix, the horn section, or the backup vocalists, etc. DCA control affects the FOH mix, while allowing the individual buses to remain unchanged. The result is a customizable workflow that provides maximum flexibility, but still allows individual buses and subgroups to serve the purpose they were intended for, such as zone sends, broadcast feeds, etc.

View Function
Across the X32 PRODUCER you’ll find strategically placed View buttons associated with various functions. These buttons enable immediate access to information about that specific function. For instance, if you press the View button in the Equalizer section, information for that channel’s EQ is instantly shown on the main display, providing in-depth editing of all related parameters. This direct access to visual fine-tuning gives the engineer a level of control previously available only on consoles costing exponentially more.

Assign Section
X32 PRODUCER’s Assign section allows you to to set up short-cuts to your favorite views or parameters. Buttons can be defined to toggle parameters on/off, adjust timing of effects by tapping, or jump to specific screen views.

“Acoustic Integration” – the Live Sound Revolution
Legendary 40-year old British company TURBOSOUND, famous for producing some of the world’s best speaker systems, have teamed up with BEHRINGER to seamlessly integrate mixer and speaker systems. We call it “Acoustic Integration”. The X32 PRODUCER’s ULTRANET bus allows streaming up to 16-channels of pristine digital audio to an array of TURBOSOUND iQ speakers - all on a single CAT5 cable, along with control data to set sound presets remotely. Furthermore, the iQ Series features “True Physical Modeling” of some of the most popular speakers which can be easily remote controlled via the X32 PRODUCER, allowing the sound engineer to apply different speaker models in real time from the comfort of the mixing desk. “Acoustic Integration” is the next live sound revolution.

100-Band RTA for all Channel/Bus EQ’s
The X32 PRODUCER now includes a high-resolution 100-band Real Time Analyzer (RTA), with full Bar and Spectrograph views. This high-resolution RTA displays the audio energy distribution in 100 frequency bands over time – capturing a sonogram window of a full 10 seconds. Switch between the Large RTA view, displaying any available signal in full screen resolution, or the Combined view with the RTA view shown above each of the channel and bus EQ curves. See the results of your filtering choices in the audio spectrum directly. Additionally, the RTA can be displayed on top of the 31-band graphic EQs in the FX PRODUCER. Monitoring and controlling frequencies has never been easier!

16 Breathtaking FX “Plug-Ins” Based on True Physical Modeling
We’ve added 16 new FX “Plug-Ins” to the X32 PRODUCER, giving you access to a total of 50+ effects that would otherwise cost tens of thousands of dollars in hardware. This new generation of high-end FX “Plug-Ins” is based on True Physical Modeling of classic audio hardware. We essentially “rebuilt” classic analog gear in the digital domain and included models of legendary processors such as Urei’s 1176*, Teletronix LA-2A* and Fairchild 670* compressors as well as the legendary Pultec* EQP-1a and EQ5 equalizers etc. We also added a cutting-edge 5-band multiband compressor. Last but not least, the X32 PRODUCER can now run 4 studio-quality stereo reverbs together with 8 channels of 31-band graphic EQ. This allows you to replace your old outboard gear with a fully recallable onboard solution.

Tell A Friend About: X32 PRODUCER

See all products by Behringer