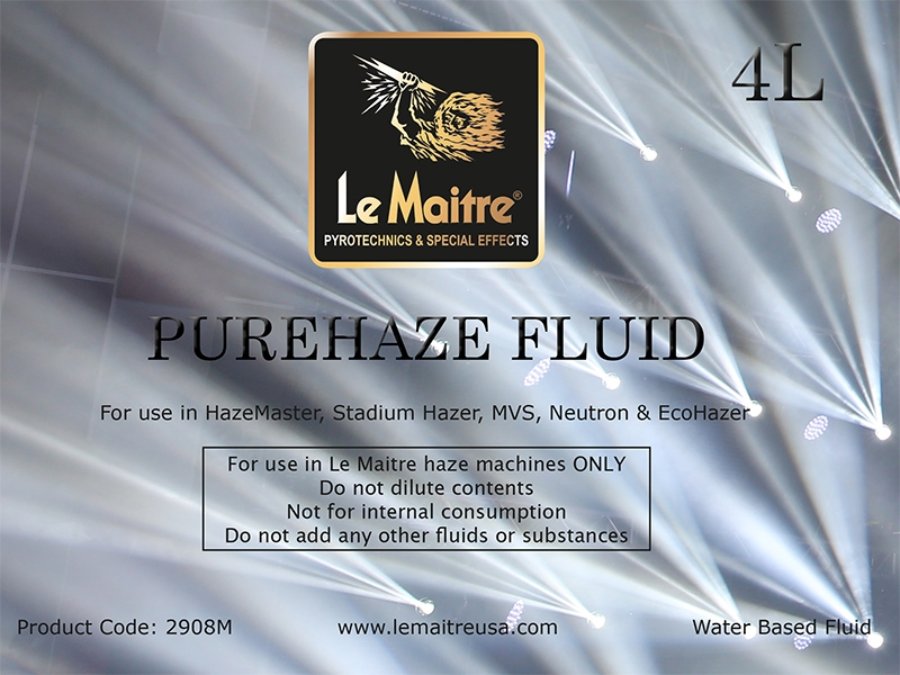 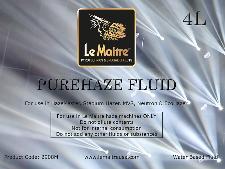 Le Maitre's hazer fluid is specially formulated to produce very dry and very long lasting haze. Designed to hang in the air and accentuate beams of light, it results in some of the best haze for lighting enhancement. PureHaze Fluid is used in much smaller proportions to smoke fluid (used in some competitive haze machines), thus giving the benefit of atmosphere without the large consumable cost.

High Performance
Le Maitre’s concentrated sugar based solution combined with the patented machines produces an incredible haze with a terrifically long hang time. Alternative machines on the market tend to use hazers which are essentially smoke machines with fans, and consequently have to use much lower concentrated haze solutions.

Safe
There is no comparison between Le Maitre’s haze and oil-based hazers which can leave a messy, slippery residue on sets, resulting in health and safety risks, as well as leaving deposits on equipment lenses, causing damage. Equally Le Maitre’s sugar based haze solution results in no side effects. By comparison, alternative systems using triethylene glycol based hazer have been found to cause respiratory, nasal, throat and vocal irritation.

Cost Effective
Not only is Le Maitre's haze more effective, but it is much more cost effective therefore to produce haze from our haze machines and fluid vs competitive smoke fluids and haze fluids.

vs Smoke Machines
A typical Le Maitre haze machine eg the MVS Hazer can produce 62.5 hours of continuous use (at 80cc output) from just 5 litres of fluid, compared to a smoke machine, which typically gives 1.4 hours of continuous use from 5 litres of fluid. So although smoke fluid may appear five times cheaper per litre, it actually costs 16 to 18 times as much per hour of output! A huge difference

vs Competitive Haze Machines & Fluids
Le Maitre's PureHaze Fluid as already mentioned, outputs nearly 100% effective haze in the air whereas alternative haze/smoke machines put just 10% of haze into the air at best due to their very diluted haze fluids. Subsequently their high content water based haze has to be pumped out in far greater quantities to achieve the same result thus greatly putting up the cost of consumables.

For use in  the Neutron XS Hazer; MVS; Stadium Hazer; HazeMaster and EcoHazer. Can also be used with the Radiance Hazer.

See all products by Le Maitre